Win32 and 64, English
CAD Design Software
Uses existing text in a DWG file or Entered text and then allows placement and position along the curve at any angle to the object.
General Usage Instructions Screenshots Commands Installation/Uninstallation Contact Version History

When using the program, you will first set up all the parameters for the text such as height, width and also select the designed Output to keep as text, convert to vectors (Contour) or 3D. When done with all the parameters, pick OK and then pick the object to follow its path (Polyline, Circle, Ellipse, Spline, Rectangle, etc.). Pick the object as prompted and then move the block of text interactively to the desired position.

The prompt remains active to allow text movement along the selected object and also text rotation (right-click to rotate incrementally). When done with positioning, press <Enter> and the final conversion will run to create the Contour, Hatch or 3D solids. If you do not want to convert right away, use the Text Only output to leave as usable text.

In the Text edit box, insert text from clipboard or type the desired text.

You may also use the Pick Text in Drawing button to select any existing text in the drawing to use, and it will be placed in the edit box.

In the Text Height edit box, type the desired height for the text that will be drawn on the object’s curve. If used the Pick Text in Drawing button, the Height will be set automatically using the Height of the text. This may be changed as needed.

In the Text Rotation along Curve (Degree) edit box leave as 0.00 to use the angle of the object’s curve or type a value in degrees to rotate the text. You may also right-click the mouse when positioning the text (after picking OK) and this will cause the text to rotate in increments.

In the Text Offset from Curve edit box, leave as 0.00 to keep flush with object or type a distance to offset from object’s edge.

Pick the Spread radio button to use the entire length of a selected object and the text to be used will spread along the objects’ path.

Pick the Text Interval radio button to set a custom pitch between each character and type the value in the edit box.

In the Text Layer pop list, select an existing layer to place the new text on (for Text, hatch, Contour or 3D) or pick *New and create a new layer and also assign a color if needed.

Use the Above Curve or Below Curve radio buttons to designate which side of the selected object to create the text and follow the path.

Use the Remove Alignment Curve check box to delete the temporary duplicate path object that appears when positioning the text. You may also remove this manually as this check box is for convenience.

In the Text Output / Conversion Format area, select the desired output to use. The selected output will be run after positioning the text on the selected object’s curve and press <Enter> to create the Contour, Hatch or 3D solids.

Text Only – This option will keep the text as a font so may be edited layer. You may also run the SIGNAGE3D command again and pick Change Existing True Type Font button in the main dialog and then run to create the desired Output.

Select the Create Polyline Contour to create polylines from the text.

Select the Create Hatch to convert the text into a filled hatch with no outlines. This will only be visible if the Fill Mode is turned on.

Select the Create 3D Text to create 3D solids from the text.

The Thickness edit box will activate for Create 3D Text to enable the user to enter the extrusion/thickness for the solids.

The Vectorization Distance setting will activate for Create Polyline Contour and Create Hatch to control the segment distance; the smaller the value used, the sharper the outlines will be. The larger the number input, the lesser the number of vector points that will be drawn for rounded shapes.

When done with the settings, pick OK and a prompt appears.

PROMPT: Select curve to align text <Exit>: Pick the object to use and follow the curve (Ellipse, Polyline, Spline, Circle).

When done dragging the cursor, Left click mouse button to complete the position and use final conversion selected (Create Polyline Contour, Create Hatch, Create 3D Text) will run. If Text Only was selected, then the prompt will exit and the text will be set at the last position. 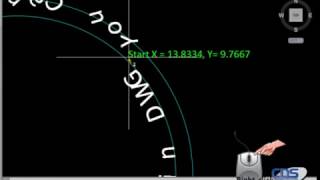