The RestCal program works on a closed, 0-width polyline boundary. By selecting a segment from one side and selecting a segment on an opposite side, the Resistor Calculation dialog box will appear. If polylines are on the same segment, an opened polyline (not closed) or a polyline that intersects itself or another polyline, the program will display warning dialogs and display a message of the problem and allow user to pick another segment or close the program.

When RestCal is executed, the following prompts appear on the command line:

After selecting the segments the Resistor Calculation dialog box appears:

Enter a Thickness value for the size of the physical boundary.

Select a Thickness Unit for the unit of measurement to use.

In Material selection pull-down box, select a known material (Gold, Copper, etc.) and the material conductivity will be set automatically in the Material Conductivity (s/m) window.

To use a different value, select Custom from the list and enter the value in the Material Conductivity (s/m) edit box.

Select a Temperature Unit of either Fᵒ (Fahrenheit) or Cᵒ (Celsius).

In the Temperature edit box, type the temperature in degrees to use in the calculation.

Pick the Calculate button and the result will be shown in the Resistance window.

Pick Close to exit the command

Pick the Help to open documentation.

If any of the values are changed such as Thickness or Units, pick the Calculate button again and the Change window will show the difference. 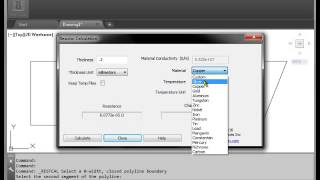 The installer that ran when you downloaded this plug-in from Autodesk App Store has already installed the plug-in. You may need to restart the Autodesk product to activate the plug-in. To uninstall this plug-in, click Control Panel > Programs > Programs and Features (Windows 7/8/8.1/10) or Control Panel > Add or Remove Programs (Windows XP), and uninstall as you would any other application from your system.

The Documentation is in the DOC folder and when in the command, pressing F1 will open the RESTCAL.CHM. The 'csolv' and 'wintriangle' folder contains the source code in a zip file to be in compliant with distribution of the EXE programs.