Win32 and 64, English
CAD Design Software
Allows placing block(s) or duplicates of a single block, upon a selected curved or straight object plus allows the user to slide these along the curve / edge
General Usage Instructions Screenshots Commands Installation/Uninstallation Contact Version History

In the Block Interval edit box, type a distance value for space between multiple blocks. If only a single block will be used, this value is not needed.

In the Block Angle along Curve (degrees) edit box, type a rotation value in degrees (0-360) if the block(s) are to be rotated. This will rotate based on the Block Position along Curve option. If no rotation is needed, leave this value as 0.00. You may also rotate the blocks in real time during placement by right-clicking the mouse button and the block will be rotated incrementally.

In the Block Position along Curve area, select a base point for the block(s) to initially run along the selected object’s path. This will then place the blocks outer edges at the selected position.

Pick OK and a prompt appears;

PROMPT: Select curve to align text <Exit>: Pick the object to use and follow the curve (Ellipse, Polyline, Spline, Circle).

The prompt will stay active to allow real-time positioning by dragging the cursor and the text will follow and show the X/Y position.

Use the Edit Block List button to open up a list of all blocks in the drawing. In the Available list, select the blocks to use by highlighting them or hold the <SHIFT> or <CTRL> keys to pick different blocks. Then pick the right (>) arrow button to move to the Selected list. You may also double pick a block and it will be added.

Pick OK and the dialog returns with the blocks selected.

To place multiples of the same blocks (array), double pick the desired block from the Available list multiple times until the desired number of blocks is added.

In the main dialog, set the Interval value for spacing and a Rotation as needed and then pick OK to place. Pick the object to use as the path / edge and these multiple blocks will then be in the selection set, and placed as desired. 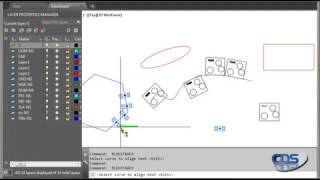