After installation, the user will get two additional buttons in the context menu - Replace From Opened and Replace All From Opened. Replace All From Opened will replace all occurrences of a selected object; Replace From Opened will only replace selected objects, which the user can select more than one of to replace at once. To access those buttons, assembly objects that needs to be replaced must be selected, then two additional commands will appear in the Context Menu, select a suitable one for the intended purpose, after which a form with previews for all opened files will appear. Select a replacement object by clicking on a desired preview, then the form will close and the intended objects will be replaced by a selected file.

While hovering over the preview, the name of the object will appear to aid with navigation, if there is no preview available, the program will state that the preview is not available and will give the name of the part below. If files other than Part or Assembly are opened, they will not be added to the form, the active assembly is also not in there to prevent a creation of recursion. 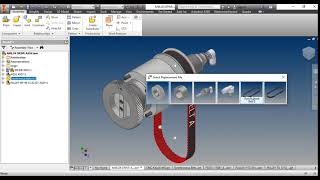 You can unload the plugin without uninstalling it by unchecking the "Loaded/Unloaded" check box associated with the plugin in the Autodesk® Inventor® Add-In Manager. You may have to restart Inventor to completely unload the application.

To uninstall this plug-in, exit the Autodesk product if you are currently running it, simply rerun the installer, and select the "Uninstall" button. OR, you can uninstall it from 'Control Panel/Programs and Features' (Windows 7/8.1/10), just as you would uninstall any other application from your system.

Windows™ 7 does not show text background for files' names in the form. The rest of the program works as intended, however, it may be tricky to read files' names while hovering over the previews.

If you encounter any issues with the add-in, please send me an e-mail at arsenii_yavtushenko@yahoo.com as soon as possible. Also, please include any additional information about the issue, like background of the issue and error message. The file in which this issue occurred would be much preferred.